A remixed Jackie's Strength/Father Lucifer single -- which features six versions of "Jackie's Strength" from remixer Warren Rigg, as well as two remixed versions of "Father Lucifer," from King Britt (of Digable Planets and SYLK 130) and John Wicks -- was released in the U.S. on Tuesday, February 23, 1999. Rusty M Shelby informs me that the CD single (Atlantic cd5 2-84442) should cost around $6.99 (or $5.99) A 12" double vinyl (Atlantic 0-84442) was also released commercially with very nice packaging (so PLEASE don't pay an outrageous price for the promo 12" on EBay, which does not even include a photo of Tori.) You can now order both the CD Single and the 12" double vinyl at CDnow. If you use the links from the Dent, you will also be helping support my site. You can find out much more about these releases below.

Barb tells me that the single was released in Canada on Tuesday, March 16, 1999 and is similar to the U.S. release.

European Single With Only JS Remixes On It

In late June 1999, Doron told me the following about a single for the Jackie's Strength remix that he found in Europe:

I thought I'd send you a quick note to say that I've just come back from France where I saw a brand new European CD-single version of "Jackie's Strength". The cover is similar to the American release (noting both Atlantic and Eastwest at the back) and the single has three tracks: the edit of the Wedding Cake Mix, the extended Wedding Cake Mix and the Meltdown Mix. It was produced in Germany, so I am guessing that it wasn't actually released in France as such, but imported from Germany. It was priced 60F (about $10)and the attached label said: released 6/99.

Here is what German Toriphile Christoph Viethen said about the European Jackie's Strength remix mentioned above:

I have never seen a release of Jackie's Strength in Germany, despite the fact that it was reported that it said "Made in Germany" on one of the singles which seem to have showed up in Europe.

(But since here in Germany, actually only a few miles from where I live, the Warner Music Group has a *big* CD and DVD manufacturing plant (they stopped making vinyl last year, so I think we won't get any German vinyl releases any more *sob*), I guess they will also manufacture media here which will then be shipped to other European countries and sold there. Which would explain the "Made in Germany" text on the single.)

Actually, it would be really interesting to actually *see* one of those European JS singles. From all the stuff which is printed on them (e.g. information about licensing organisations - in Germany most probably "GEMA" would be printed on the disc) one might be able to find out exactly for which European countries it was made. It would be excellent if somebody who saw one of those singles could provide scans of it ...

Luciano Ferreira posted to the ToriNews mailing list the fact that the Jackie's Strength remix single has been released in South Africa.

It seems that South Africa has released its own CD single of the Jackie's Strength remix, but only with three tracks (Wedding Cake Edit, Wedding Cake Club Mix, Wedding Cake Meltdown Mix). It's not that exciting news, but it's interesting to know that the only time S.A. released any other CD single of Tori's was when Professional Widow was released in 1996, so what I am trying to get at is that they must have a lot of faith in the new single. (It is receiving a lot of exposure on radio and television here in S.A.)

JS Remix Single Not Released In The U.K., But There Was A UK Promo For It

July 26, 1999 - EWF Doron Vidavski was the first to report that the Jackie's Strength Remix Single might be released in the U.K.. There was word of a April 12, 1999 release date, but nothing happened. The we heard about a July 19, 1999 release, but that did not happen either. I have been told by Andy & Emma that the single was definitely not released in the U.K. So that means that U.K. Toriphiles only got one single from the Choirgirl album...

However, there was a UK promo for the single that was available. It was listed at various times at the Esprit web site

Many thanks to Mike Gray, Doron Vidavski and Pete Lambert for informing me about this. The odd thing about this UK promo is the fact that it is marked as an Atlantic release! Here is a description of the promo from Pete:

It's clearly marked as an Atlantic PromoÝonly issue (no mention of East West), with their American address etc, but with the SAM00008 (or similar) code number. It's a single 12" disc, only featuring the 6 mixes of Jackie and no Father Lucifer. The front and back cover are the full length "skimpy" glitter dress picture "wrapped around", and the record labels don't have pictures on them. Ý It's bizarre that it's different from the US promo version - maybe Atlantic are going over the heads of East West and promoting it here themselves??

The Artwork For The U.S. Single & The Track Listing

Toriphile Amanda *Sparkly Girl* Keller obtained an advanced copy of the CD single and has scanned the artwork. She has also provided me with further details on the single, including the exact track listing. You can see the CD cover below (Tori is actually sideways but I have rotated the graphic so you can see it better. The CD comes in a jewel case.) Below that you can see another scan of the back of the CD single (which features the rest of Tori and the track listing), and a third scan of a black & white photo that is on the back side of the CD insert. It is certainly one of Tori's more sensual covers! Here is the track listing: 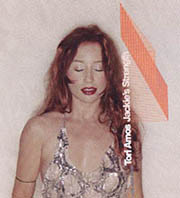 The front of the CD single. Click to see larger. 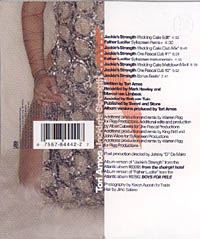 The back of the CD single. Click to see larger. 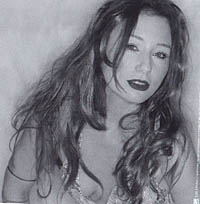 The photo on the back side of the CD insert. Click to see larger.

The double 12" vinyl is very nice and highly recommended. It folds out to show a more complete , full-body photo of Tori in the same pose as on the CD single. The inside shows the same photo as the black & white photo seen above but in full-color. You can also see a smaller version of the photo that is featured on the cover. (See below.) The smaller photo however has some lines going through half of it that fortunately are not on the photo on the cover. The label on each vinyl has a small version of the photo as well, and you can also see that below.

Here is the track listing for the double 12" vinyl:

Disc One - Side A

Disc One - Side B 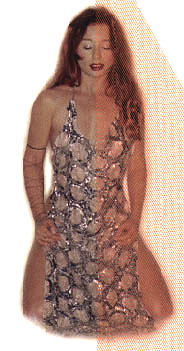 Small photo inside vinyl; Same photo used for cover when folded out 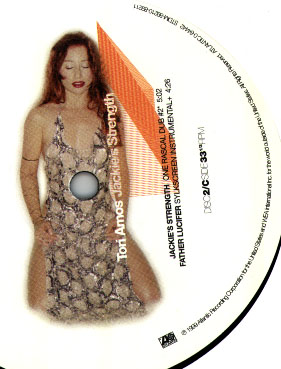 The label of one of the vinyl discs

Alan Denniberg describes both the CD single and the 12" vinyl below. The packaging for the vinyl is a little different and very nice:

"the picture of tori on the atlantic page is the cover. it looks kind of like a mugshot but of course MUCH prettier! there's the picture of tori, the title, and this weird orange line design thing. the back side of the CD insert has a similar picture, but in black and white and with her eyes open - with a very smart-ass, almost confused-looking face. the vinyl packaging is absolutely beautiful - huge, and the inside has the same confused picture but in gigantic color. also, the bottom half of the picture shows the whole thing - it's tori wearing this crazy mirrory sequiny silver dress kneeling on a white fuzzy carpet. the back of the LP has this shot from the waist down.

Review Of The Single In Billboard

The March 6, 1999 issue of Billboard Magazine contains a review of the new Jackie's Strength remix single:

"Atlantic's long-established chanteuse Tori Amos follows up the underground club success of "Raspberry Swirl" with the equally sublime "Jackie's Strength." Culled from Amos' essential new album, this song is, without question, the singer's most commercially viable club - and radio - track. Underground club punters will salivate over Albert Cabrera's One Rascal dubs, while trance-leaning popsters will gravitate toward Warren Rigg's deft Wedding Cake mix. Such orchestral beauty doesn't come along everyday. Of course, neither does the unmistakable voice of Amos."

Jackie's Strength Tops The Dance/Club Play Chart In The U.S.!

in the March 27, 1999 issue. The song took 6 weeks to reach that position. The song entered the chart on February 20, 1999. Here is a summary of the positions it has held on this chart:

I am not sure how Tori feels about being the top Dance Diva in the nation but the Dent would like to congratulate her!

The Cover Photo For The Jackie's Strength Remix Single

had a preview for the Jackie's Strength Remix Single, and they used an image of Tori for the background which is the cover photo for the new single. I have placed the image on the Dent after boosting the contrast so you can see it better. (You can click on the image on the left to see it larger.)

You could find at the Atlantic Web Site

a special page where you could get a RealPlayer video preview of Tori singing "Raspberry Swirl" from VH1 Storytellers, as well as RealAudio preview of the Wedding Cake remix of "Jackie's Strength" and the Sylkscreen remix of "Father Lucifer." I am surprised by how much I enjoyed both remixes. They really sound cool to me! The Father Lucifer remix includes a part where you can clearly hear lyrics that are hard to hear in the original version because they are layered over other vocals. Be aware that you will hear an announcer interrupt the song every 30 seconds or so saying that your listening to Tori Amos courtesy of Atlantic Records in order to discourage bootlegging. 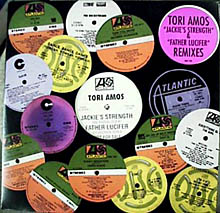 I now have some information about a double 12 inch vinyl Atlantic promo (#DMD 2496) that includes remixes of Jackie's Strength and Father Lucifer. Several people informed me that this item is currently being auctioned at eBay. (Be aware that the 12" double vinyl has been commercially released, so please don't spend a fortune on this item!) You can see a photo of this 12 inch promo vinyl to the right. I was also informed about this from Toriphile Michael Eugene Adams, who found out about it from a friend of his named Ron Slomowicz (DJ Ron) in Nashville. This is a promo release clearly geared to the club scene. Here is a track listing from this 2-record promo. No times were printed on the label:

Back To Main Choirgirl Page