. An exact link to order this single is below: 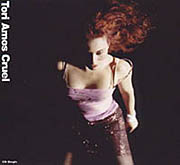 You can see to the right the cover for this single. (Click on the cover to see it larger. Thanks to Amanda Keller, Sean Francis and Larissa Silva.) The photo shows the front side of the single, for the song Cruel. The back side has a photo of bright red raspberries and is for Raspberry Swirl. The CD will cost about $3.99 and has the number Atlantic 2-844122. There should also be a cassette single available. Amanda Keller received the single early and has given me the track listing you see below:

Amanda says that Shady Feline Mix of Cruel does not sound too different from the original. The Lip Gloss and Ambient Raspberry Swirl are reportedly the same as what appeared on the German RS single. Toriphile woj says that the the shady feline mix of "Cruel" emphasizes the beat making it a shade dancier than the original. The "mainline cherry - ambient spark" is described as cool. "It's not as much a remix as a minimal cut-up of the song, interspersing the keyboard riff from the song's intro with the rest of the melody. Over this, the vocal remains."

There is also a 2-track promo CD out there with Raspberry Swirl (Lip Gloss Version) and Cruel (Shady Feline Mix) on it. Toriphile silverfish posted to the Precious-Things mailing list that "the promo comes in a cardboard box with a slide out tray (like the US JS single)."

Back To Main Choirgirl Page