Page Down For Many Photos From The Concert! 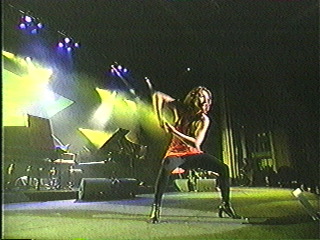 The Place on Lifetime aired the one hour special showing Tori performing the RAINN Benefit Concert on Friday night January 24th at 9:00 and Midnight EST/PT. What they showed was incredible. The concert was very exciting and at points very poignant. I must give credit to Lifetime and Spanky Pictures, who created one of the best concert/TV program on Tori I have ever seen!

First of all, we still missed most of the show! The actual benefit show started with Tori coming in stage to the tune of Son Of A Preacher Man and then playing Beauty Queen/Horses. Lifetime did not show this. They kept the focus of the concert on her more familiar songs. Tori sang 17 songs at the concert (counting BQ/Horses as one), but the TV show only aired 7. They were shown in this order:

The dance during Cornflake Girl was fun to watch as always. I was both amused and irritated that some fans were trying to give things to Tori during her Dance. I understand very well the desire to meet Tori and give her gifts, but there ARE better times to do this! Interrupting her dance routine was rather thoughtless IMHO.

Tori talked to the audience and said these heartfelt words:

"Hi everybody. I just want to thank everybody for coming tonight. I know the tour is over and everybody thought I was going home, and it's one of those things where when you're supposed to leave the party you know, and you come back and it's like 'Oh you, just go already.' But um, tonight is really special. For those of you who have been to so many shows, I saw so many people before the show, and I just want to thank you for driving to Seattle, being on the bus from Chicago, coming from Israel, coming from everywhere to be here tonight. Thank you."

Winter was so beautiful and so sad. At times, her voice barely rose above a whisper, and she almost seemed to cry. Talula was funky fun, and Me & A Gun was ten times more powerful than any previous time I saw it, due to the nature of this concert.

One big surprise was the fact that Muhammad My Friend was a duet with Maynard from the Tool. Before singing that song, Tori said, "So this is one of my dearest friends. This is Maynard from Tool, and uh, and uh, I call him up when I'm feeling terrible and he sings me lullabies. So I asked him to come and sing tonight."

Pretty Good Year was the last song of the broadcast AND the actual concert. The surge of power toward the end of the song was exciting.

The audience showered her with flowers and gifts, to the point where the stage looked like a florist shop after a tornado :) Tori seemed in great spirits as she left the stage and waved to the audience. All I can say is that I wish I could have been there! Even though Lifetime had to leave out most of the show, it was great that we got what we did. In some ways this show was the last one of the Dew Drop Inn tour, since she used the same setup as on that tour. On behalf of everyone I know dealing with sexual abuse, thank you Tori. Thank you for caring.

This Concert For RAINN was shown later in other countries as well, including Australia. I am not sure if they saw this shortened version that was shown on Lifetime, or if they saw the entire concert that was made available on Home Video.

My friend Kim H. Had this to say about the telecast:

First of all, my strongest impression was of the song "Winter".

It really struck me that she was singing this right to her loyal ears with feet. Coming as it did right after her obviously heartfelt and genuine (and when is she NOT ?) thank-you to every fan for supporting her tour and coming by bus and car from Chicago and etc and all the way from Israel (i heard some guy shout at that mention; was that you-- the one who told her that ?)....and the way she faced right to the audience on 'when you gonna make up your mind' and 'when u gonna love u as much as i do'....and the expressions on her face, i just got the overpowering impression she was flashing back on every EWF who had told her their story at soundchecks and in the rain and after the show and in letters....one could see it all flicker over her face like a slowmo montage and sense how much it means to her. I had this feeling thruout "Winter" and what was merely choking me up at first, became tears and then downright sobs. She is just so powerful and one could see the beauty of her spirit (in close-up yet) and i just couldn't take it. I lost it. I was and still am as i write this, INCREDIBLY moved.

I thought the Cornflake Girl dance was adorable too, as always. Talula rocked. Caton i must say looked (and played) very groovy. ;-) The duet with Maynard from "Tool" was very good and i appreciated her sharing with us that she sometimes gets 'down' and needs a lullaby from her good friend Maynard!

I admit i am disnappointed Lifetime didn't broadcast her version of "Hurt", i was so excited to see it was on the set list. But who can complain ?

Lastly, on the reason for the concert. I thought the station break info spots about RAINN and tori's interview were very well done (bjork and michael j. fox also each spoke for RAINN and quoted statistics) and tori's story about the young girl who was hysterically asking her for help to the point that tori took her with her that night on her tour bus, then decided to do something more permanent and found RAINN, was incredibly moving as well. Is there anyone like Tori?? Well, thank heaven there is at least one.......:-)

The rendition of "Winter" is the most moving thing i remember seeing in a very long time, and will stay with me a long time, i know.....

Read Reviews From People Who Were At The RAINN Concert.

"Tori Amos Live From NY" - The Home Video Release Of The Entire RAINN Benefit Concert - See even MORE photos from this concert!

More Photos From The Show

Please give me feedback, comments, or suggestions about my site.
Email me (Michael Whitehead) at: mikewhy@iglou.com