On December 7th, 1996, I saw the Week In Rock on MTV and here is a transcript of what was said provided by Richard Handal to the Torinews mailing list: 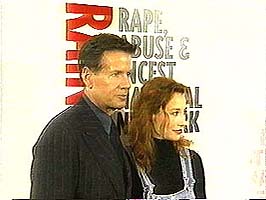 In New York City's fashion district, meanwhile, singer Tori Amos held a press conference on Wednesday, with clothing designer Calvin Klein to announce a new fund-raising drive for "RAINN," the "Rape, Abuse, and Incest National Network," a group that Amos, who's had personal experience of rape, established in 1994, with help from her label, Atlantic Records. Amos is hoping to raise a half-million dollars for "RAINN" which operates a free, confidential, 24-hour hotline for survivors of sexual assault by staging a January 23rd benefit concert at New York's Madison Square Garden, for which tickets go on sale Monday, and through sales of a new Klein-designed T-shirt bearing the words "unlock the silence." The shirts are on sale now at Klein outlets, at $25 a piece, half of which is being donated to "RAINN." As for the "RAINN" sexual-abuse hotline, it's toll free. Call 1-800-656-HOPE.

On December 5th, 1996, MTV reported on the MTV News Online section of their web site on the Press Conference held December 4th with Tori and Calvin Klein to annouce the year-long RAINN Promotion. Here is what the report said:

Singer Tori Amos and clothing designer Calvin Klein held a press conference in New York City on Wednesday, to announce a new fund-raising drive for RAINN (the Rape, Abuse, And Incest National Network). Amos, a rape victim herself, established RAINN in 1994 with help from her label, Atlantic Records.

"I've just done a whole year of shows," Amos said at the news conference, "and there are young women who would come back to me and say, 'I really don't want to go home tonight, can I come on the bus with you?' And I would say, 'why don't you want to go home tonight?' And one in particular, young woman said to me, 'because I have to go home to my step-father and he raped me last night, he'll rape me tomorrow night, and he'll rape me tonight, and I don't know here to go.'

Amos hopes to raise half a million dollars for the organization (which operates a free, confidential, 24-hour hotline for victims of sexual assault) by staging a benefit concert in New York City next month. The RAINN campaign also hopes to generate revenue and awareness through sales of a new, Klein-designed t-shirt bearing the words "Unlock the silence."

Tickets for Tori Amos' benefit concert for RAIN at Madison Square Garden on January 23 will go on sale on December 9. The "Unlock the silence" t-shirts are on sale now, for $25 each, at Calvin Klein outlets.