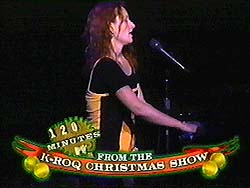 MTV 120 Minutes aired their KROQ Almost Acoustic special early Christmas Morning in the US from 1:00AM to 4:00AM (and showed it again at midnight December 29th). I watched the show, but I fell asleep and missed Tori :( Luckily, my good friend Stacey Russell taped the show, and I now have photos for you! Danica Knox kindly provided me with the complete transcript you see below as well. The show was not as great as I hoped. They mainly showed regular videos and only showed 5-10 second clips from the actual KROQ Christmas concert. Matt Pinfield also talked to the artists backstage for about 1-2 minutes. They showed a 10 second clip of Tori singing Precious Things, and they played the Silent All These Years video.

Take Me To Page Two Please! 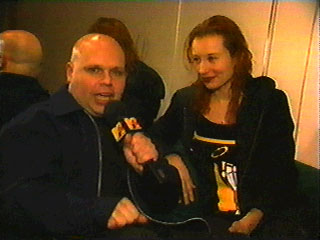 I just saw Tori on MTV, with the KROQ special. Thank goodness they decided to show it. This is what happened...They actually played Silent All These Years, which TOTALLY threw me for a loop! Figures that they would play a Tori video when she is on, and one that can be easily found (home video). After the video Tori talked to Matt Pinfield...here is the conversation: 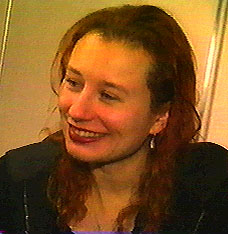 Matt: ok, we just saw Silent All These Years, from Little Earthquakes. I'm with Tori Amos. at KROQ Acousitc Christmas...ALMOST Acoustic Christmas 96. Tori it's really nice to see you again.

Tori: Good to see you Matt, been awhile, hasn't it?

Matt: It's been a while, you've been working and touring pretty endlessly. The last time I think we got together was Cybercast, I think we were trying to work on something trying to make that happen, but its good to see you again. And the shows at the end of the tour were really amazing, and really heartfelt. Have you been, I mean, you've been pretty much did a couple shows at the Madison Square Gardens, I think it was....and then the Paramount there...and you were in Tampa. Florida too. Now you've been going pretty much straight through right? Have you had much time to yourself?

Tori: It's finished now, did 187 shows...and um (tori folds hand and acts like she is sleeping, breathe heavily)...been sleeping.

Matt: Getting some rest?

Matt: One of the really really important things you've been working on is the RAINN, with Calvin Klein..you launched that. Can we talk a little bit about that?

Tori: Um, we're doing a concert in January, again...at the Paramount in Madison Square Gardens Theatre. And that will be aired on the 24th, on Lifetime television. The concert is the 23rd, and the idea is that Calvin Klein has stepped to the table and um, they created a tee shirt that the theme is "Unlock The Silence". It will be a black and white tee shirt in Calvin Klein stores. And he's a whole program for the whole year. That part of the proceeds will go to RAINN, which is really exciting cause we want the phone lines to be working 24 hours so that you can call anywhere in the country.

Matt: What can we expect in 97 from you?

Tori: Um, I don't really know yet. It's the first time where I uh, I always promised myself when there was nothing coming musically and I had nothing to say, that I would shut up. That I would go away for a while, because um, I think the worst thing you can do is uh, kinda hang your butt out the window, when you don't have any sun on it. (Matt laughs) I'm going to take off for awhile.

Matt: I appreciate you talking to us today Tori. It's good to see you tonight too at the KROQ show.

They then go to a commercial and between that show live footage from Tori's KROQ performance. It was Precious Things.

More photos of Tori talking to Matt and some shots of Tori singing Precious Things at the KROQ concert are on page two.

Take Me To Page Two Please!