Let the Lava Flow
Not all of Tori Amos' fans have been able to follow her progression from earthquakes to volcanoes, but the sizzling songstress doesn't pay any mind. 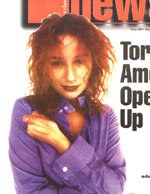 Ever since her eye-opening 1991 debut, "Little Earthquakes", Tori Amos has stood out as a maverick in a pop music world that is all too prone to simple, proven formulas. Usually aided only by her solo piano accompaniment, exploring melodies and arrangements that are not bound by standard time signatures or verse-chorus structure, and writing lyrics that can be cryptic yet probe deeply, Amos has established herself as a truly original artist. [That's one hell of a run-on sentence!]

So it's no surprise that Amos says if listeners want to understand her new CD, "Boys for Pele", they may need to abandon the conventional ways in which they approach a record.

"It's a metaphorical work, so if you use your head, you're kind of in trouble," Amos says. "You have to really go from your senses. It's what things represent more than what a word means. It's association. And if you go through that way, then you're responding from your instincts and tastes and smells, that whole kind of response, instead of analytically. It's a heart record. If you use your brain, you won't get it.

"It doesn't matter that you're going to see different faces than I am. I'm not trying to get you to see who I'm talking about. It's about an emotion. I do hope they feel the emotion or I haven't done my job."

For many of her fans, "Boys for Pele" is Amos' most challenging work to date. Although it sounded startingly original when first released, "Little Earthquakes" now seems rather conventional by Amos' standards. It had plenty of straight-forward lyrics - particularly on "Me and A Gun", her chilling first-person tale of rape, and "Silent All These Years", her story of repressed identity - and its songs were musically accessible and radio friendly.

By the time of her second solo outing, the 1994 CD, "Under the Pink", Amos' lyrics had grown more impressionistic and her music more adventurous, as the songs ranged from the percussive tones "God" to the gentle solo piano sounds of "Bells For Her".

On "Boys for Pele", Amos pushes herself - and her listener - to further extremes. As her comments about the sense-based content indicate, her lyrics have grown more cryptic than ever. The CD does have a general theme: it describes a woman's struggle to stop living through the energy of outside forces, be they lovers, friends, or work. The problem (for some) is that Amos has created a work so open-ended that many of the songs could mean starkly different things to different people.

Amos cuts a diverse and daring musical path through the 18 tracks on "Boys for Pele". Many of the songs lack the immediate pop appeal of older tunes like "God", "Cornflake Girl", or "Crucify", and instead veer sharply around the sonic map. There are quiet, contemplative tunes like "Marianne", whimsical moments like "Mr. Zebra", and stormy, emotional eruptions like "Professional Widow" and "Blood Roses". More than a few critics have found "Boys for Pele" to be too extreme, and have criticized the CD for a lack of musical focus and for lyrics that at times seem unfathomable.

But, regardless of how others hear it, Amos' candid comments about her music and "Boys for Pele" leave no doubt the CD has deep personal meaning for her and required a substancial emotional investment to create. The project, Amos says, had its genesis during a particularly difficult point in her life. At the time, a number of personal relationships had undergone change. Most notably, she had broken up with Eric Rosse, her long-time boyfriend and producer of "Little Earthquakes" and "Under the Pink". Amos had also been touring extensively behind "Under the Pink", and had reached a point where she found herself drained of emotion and identity - and desperately in need of escape and rebirth.

"Pele is a volcano goddess in Hawaii, and I fled to Hawaii in the middle of the "Under the Pink" tour for five days when I was at my lowest, and I couldn't feel any fire within myself. I couldn't feel anything," Amos says. "I came to the north shore in Hawaii, and a friend of mine - we'll call her a medicine woman, a very wise woman - was there. And I felt after the San Francisco, or around those dates, I couldn't feel a sense of when I wasn't behind that piano or with a man in my life. I couldn't find out who the woman was. Some of you may ask me, 'Why did you go to the men in your life?' and the truth is I felt they had an energy force, to a flame, that I couldn't find. When I went to the north shore and I just spent time walking up and down that beach with this medicine woman, I just began to feel the presence of Pele all over the island, even though I know she's not on that island. I just felt this deep little flame start to happen.

"If I could have one one-billionth of what I felt from that energy, the volcano that permeates that whole space there in Hawaii, I was like: I won't need anything. I won't need to go a party and be liked. I won't need people to understand. I won't need anything. So Pele really got me in touch with repressed anger that I needed to loose, got me in touch with the resentment that I had had and the deep place in the heart where I was really, really sad, because I couldn't be playmates with certain boys that I had wanted to be playmates with because we just didn't want the same things, although there was a lot of love."

Perhaps she just needed to hang out for a while in the company of a South Seas island volcano goddess to realize it, but Amos now understands that her artistic progression has really been a search for her true self. "Well, you know there are no victims, that's where I sit now," she says. "The journey from "Little Earthquakes" through "Pink" to "Pele" has been really a claiming of womanhood. And I kind of see these records as a trilogy.

"You know, being somebody else's opinion, most of you creatures out there haven't been exposed, I don't think, to people making comments on your work on a big scale. What can happen when that happens to a few of you, whether you're writers or musicians or etcetera, you can start to become these opinions. And everybody has an opinion, guys. People will love you, people will hate you, people will say you're not worthy to even make music. People will say you're the most amazing thing there ever was. And in truth, you just have to throw it all out and just know where you stand with yourself, know when you don't have it, know when you do.