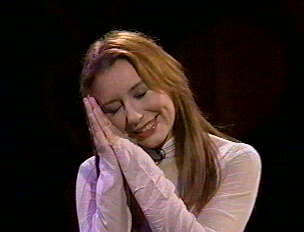 Tori appeared in person on MTV 120 Minutes on Sunday night, November 14, 1999. (It started at 1:00AM ET, which is really November 15.) Tori was on during the first hour and sat with the host, David Holmes, and chatted between videos. They also showed the 1000 Oceans video. Toriphile Syvvie has created several screen shots and a partial transcript of the appearance on her web site called Sara's Electric Faerieland. She has graciously allowed me to use her photos, but I wanted people to actually visit her web site first, since she went to all the trouble! I will add the photos here soon. Above you can see one of Syvvie's photos. Below you can read some comments that were sent to me about the show.

This show was obviously taped back in the middle of October 1999 before Tori went over to Europe for her promotional tour there. Tori mentioned during the interview that she was going to be in Kevin Aucoin's new book. She will be made up to look like Mary Queen of Scots. Kevin Aucoin is a Make-Up Artist who included Tori in his 2 previous books, "Making Faces", and "The Art Of MakeUp". At this time I have no additional details about this book.

November 17, 1999 - The mtv interview was about 20 minutes long with endless commercials in between! This interview was so funny! The host David Holmes was so scared of Tori it was very obvious! Tori used some slit brit slang and some accents on some of her word it was so cute. Tori was so laid back! She really seemed happy and confident. She was so beautiful. She talked abou the first band 'y kant tori read'. She said it was a shame she doesn't fit into the outfit on the cover of that album. She talked about being solo as being opposed to the band. She said 'fuck' twice ofcourse they censored! She said that because she was talking about how she listened to the record label and the needs of radio when she was doing 'kant tori read's album. She needed to get that out. Tori, was so charming in this interview. The interview ended with the video '1000 oceans. This was an interview was not what I expected from mtv.