On December 9, 1995, Tori appeared on the U.K. TV show Later With Jools Holland. There was a short interview, and Tori played "Putting The Damage On" and "Mr. Zebra" with a small brass band called The Black Dyke Mills Band. You can read the interview and see photos below. (Many thanks to Dolll for sending me the photos.)

Jools: Tori Amos, ladies and gentlemen! First of all I'd like to welcome you back to the show 'cause it was great, we had you on the show about two years ago, something like that, and the show's become much better then, but partly for you being on it.

Jools: Now first, I want to go back to the very beginning - now you went, you were a child prodigy pianist and you went to a top music college when you were a child. A classical, to teach you concert piano, did that help you?

Tori: (after long pause) No, no it didn't help me.

Jools: Was it a bit constricting for you?

Tori: Well, I think what happens a lot is when you play because you love it and its from this...you know the place that you eat pizza from and you crave pizza?

Tori: And its so real. Like I'm craving it right now. Yeah, when its that place that you play your music from.

Jools: And of course it probably stops you from writing your own things because you're forced to sort of study other peoples' things. Now you then went on and you played, you sang in bars and you made a rock album in the eighties, what was the moment when you decided to do your own thing?

Tori: When my record bombed. When I was in the toilet. I mean at the end of the day I'm this girl that plays the piano, I tried to be Lita Ford in leather pants and it was just not impressive to anybody. So I came back to what I do and I said "If I'm gonna be a girl at a piano, I'm gonna be, you know, I'm gonna try and make it interesting.

Jools: Now you, I believe Judy Garland was a...

Jools: She was a big...I'm please to say we managed to find some footage of her...

Tori: where is she? ... (cuts to video of Judy Garland singing a chorus of "Over The Rainbow")

Jools: What was it you particularly liked about Judy Garland?

Tori: She sang to millions and millions of people and I always felt like she just for me. It wasn't about ego, it was about singing to some little person in his house and then you wanted to get out of your house so bad. And she made you think you could.

Jools: Oh lovely. And your new album is called "Boys For Pele"?

Jools: And where does that title come from?

Tori: Well, Pele is the volcano goddess and I thought of like, um, sacrificing some of the boys in my life to her but then I decided that that wasn't really a very good idea. And, the album is sort of about the way I've stolen fire from the men in my life. And I got tired of doing that 'cause I have my own. But I couldn't see that for a very long time. And now I can respect them without needing to suck their blood.

Jools: That's very good. I'm very pleased that you've done that, (Tori giggles) for one. In fact, we all are and we're looking forward to hearing you later on...Tori Amos, thank you very much indeed.

Photos From The Show 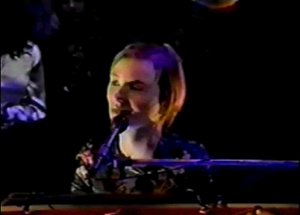 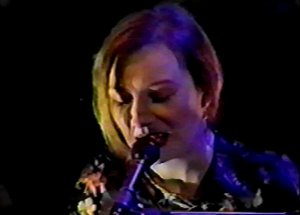 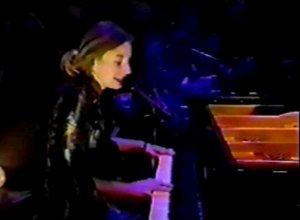