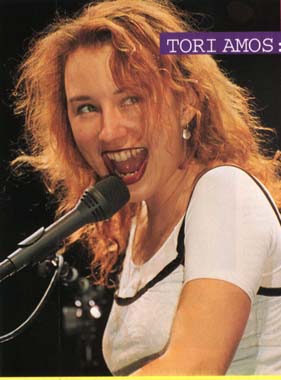 Tori has a short (and rather bland) article in the December 1996 issue of Cosmopolitan magazine. She is in a section called Rockin', Ragin' and Female. Other artists shown include Melissa Etheridge, PJ Harvey, Jewel, Tracey Bonham, Alanis Morissette, and Liz Phair. Here is what the section on Tori said:

Tori Amos is a preacher's daughter who spent her teen years worshiping the three Jimmys: Jimmy Page, Jimi Hendrix, and Jim Morrison. Luckily, Daddy didn't try to exorcise his daughter's rock-and-roll demons. Instead, he accompanied her to Washington, D.C. piano bars, where the native North Carolinian launched her career. (A child prodigy, she was already playing the keyboards at an age when most of us were still being potty-trained.)

Music fans who prefer to be spoonfed their pop may be frustrated by Tori's complex lyrics. "I like to go down the rabbit hole," says this crimson-haired Alice, now thirty-three. In the haunting a capella song "Me and My Gun," [That is what they have!] from her first album, in 1991, Amos shares the anguish of her own rape. Boys For Pele, her third and latest album, is more universal in scope (she attacks organized religion in "Muhammad My Friend"). Still, pieces of her own life can be found in Pele. After ending a six-year relationship with her producer, Eric Rosse, Amos says she felt completely alone for the first time. Oddly, the sudden solitude gave her a sense of her female force: "I'd always thought only men has access to this fire," she says. And then, fortunately, she vacationed solo in Hawaii, where the spirit of Pele, goddess of volcanoes, reigns. Trust a force of Mother Nature to help a girl ignite her inner flame and a red-hot album.